Selling, Buying or Leasing Is Just A Click Away! Search Now!

Here is the AREA market report on the Alberta real estate market. AREA is a REALTOR® organization providing services to its members. A valuable resource for REALTORS and their clients, it provides great market information such as this report. A link to the actual report is at the bottom of the article, enjoy!

Residential sales activity reported through the MLS® Systems of real estate boards in Alberta numbered 5,017 units in April 2018. This was down 7.9% from April 2017.

A total of 1,895 home sales were recorded through the MLS® System of the Calgary Real Estate Board in April 2018, down 20.8% from a year earlier. The combined value of home sales activity in Calgary was $875.8 million, down 23% from year-ago levels.
There were 1,842 home sales recorded through the MLS® System of the REALTORS® Association of Edmonton, down 1.6% from April 2017. The total value of home sales in Edmonton was $682 million in April 2018, down 4.9% on a year-over-year basis. 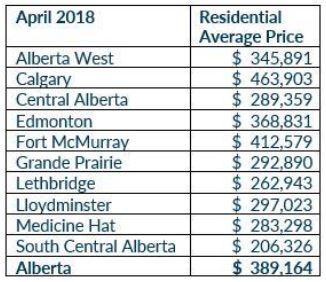 Active residential listings numbered 33,516 units at the end of April. This was an increase of 15% from the end of April 2017 and marked the second highest-ever levels for this time of the year after 2008.
The dollar value of all home sales in the province in April 2018 was $1.9 billion, decreasing by 12.4% from the same month in 2017.
The dollar value of all home sales in Canada fell 23.7% on a year-over-year basis. The months of inventory ratio (total inventory / monthly sales activity) continues to be an important market indicator, comparing the number of months it would take to sell current inventories at the current rate of sales activity. This ratio can suggest if the market is moving quickly or slowly, and how long the average property may stay on the active market. The April months of inventory ratio was at 6.7, up from the 5.3 months recorded at the end of April 2017 and above the long-run average of 4.2 months for this time of year. A score of 6.4 is still generally thought of as a “balance market,” not favouring either the buyer or seller.